In order to compare the situation of the two lesser used written languages Nynorsk and Latgalian, we identified four suitable ways of comparison, namely:

Each one of these approaches has its advantages both when it comes to understanding processes and situation of the two languages and when it comes to presenting the findings to a broader audience.

1. The situational approach for comparison

The major similarity between the languages is that both languages are the lesser used of two written standardised languages within one language and country. Moreover, both have developed under other foreign rule, the two countries becoming fully independent in 20th century (1905 and 1918) after a period of constructing and developing national identity. In addition, both are geographically connected to one area, namely Western part and mountain areas in Norway and the Latgola region in Latvia. Interesting enough, both also have had important development, events, activities outside the region. A lot of Nynorsk activities took and is taking place in Oslo, whereas St. Petersburg was an intellectual centre for Latgalian language, as well as Riga and in second half of the 20th century in exile in other countries.

At the same time, there are also some significant differences. While Nynorsk has had a general development strengthening its position with minor setbacks, Latgalian has had three major setbacks in development. Also, while Nynorsk is felt as a national language to a quite large extent, Latgalian is more tightly connected to a distinct region also in a cultural, mentality and religious sense. Another difference is in the sphere of use. While Latgalian was used for religious purposes from the very beginning as the first writings came a part of the Contra-Reformation of the Jesuites, it took time before Nynorsk also was used in church, only from 1892. Latgalian has also not regained its status and there are several spheres in society where it is not used. Many Latgalians cannot write in Latgalian, and other Latvians are not familiar reading Latgalian. All pupils with Norwegian as first language is taught to write also in Nynorsk. Also, when it comes to the standardisation there are differences, namely, Nynorsk allows different variants in the orthography, making it possible for Language users to choose a variant that is closer to own dialect or other preferences. Latgalian has two competing orthographies (traditional and official), and neither of them do not allow many variants.

Although Nynorsk also has had its setbacks, especially when it comes to the geographical core area and percentage of population using Nynorsk as their preferred written language, the setbacks of Latgalian are more of a political nature and this political oppression had greater negative impact of the usage of the language. In 1865, the printing prohibition was set in force and later on the prohibition to spread books in Latvian in Latgola. At that time the written word was spread only through distribution of handwritings. This lasted until 1906, and afterwards Latgalian strengthened it positions until 1934 when the authoritarian regime of Kārlis Ulmanis began and the Latgalian language was oppressed again due to the idea of a nation as something culturally homogeneous and there was place only for one Latvian language. Again, a new regime hostile to Latgalian language began in 1944 with the Soviet occupation of Latvia with total stop of public use of Latgalian after late 1950ies which lasted till Latvia regained independence in 1991. 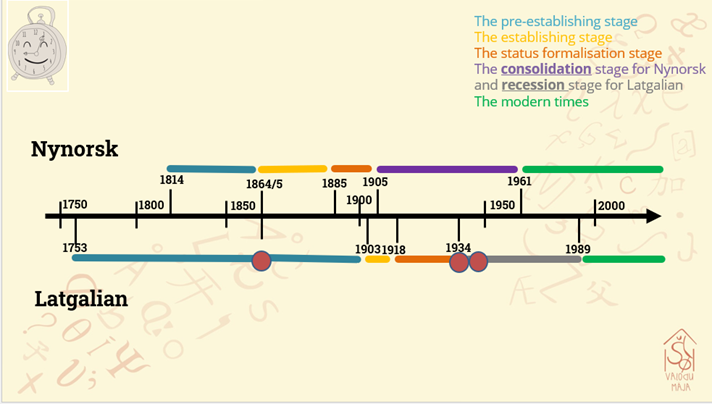 For the chronological comparison we have identified five stages, whereof four are common for the two written languages and one is different:

In the pre-establishing stage Latgola was under Polish, later Russian rule, however, in a different territory than rest of Latvia. Norway under Danish, later Swedish rule (however, with wide autonomy) from 1814. The first publications were secular for Nynorsk by native users of Norwegian, but for Latgalian they were religious genres: spiritual works, tutorials, songs, descriptions of nature, poetry, by Polish clergymen (Jesuites). First known publication in Latgalian was the catechism of 1730, and oldest still kept Evangelia Toto Anno (1753). Latgalian also taught at theological seminary in Krāslava from 1757. The first setback for Latgalian was also during this time: Under printing prohibition after 1864, when it was not allowed to print books with Latin letters, the development of Latgalian slowed down.

During the establishing stage work on language standardization found place, the languages were used by more people. Many of these activities took place outside the core area of language, namely in Oslo and St. Petersburg (studies at Catholic Theological Academy, development of Latgalian intelligentsia).

The status formalisation stage Nynorsk achieves its legal status in 1885, and in 1894 the first juridical paragraph was written in Nynorsk (Landsmaal). Latgalian achieves status as regional language after 1918, when Latvia becomes independent. In this period the languages are used in schools and both languages get official standardization (1901 for Nynorsk and 1921 for Latgalian in schools, 1929 also by Ministry of Education in Latvia). This is the blooming time for Latgalian (1917-1934), rich variety of periodicals, literature, theatre, music etc. The Latgalian language is used in primary schools as a medium of instruction, other minorities enjoy cultural autonomy.

The next stage is different for the two languages, namely consolidation for Nynorsk and recession for Latgalian. During the consolidation stage, Nynorsk achieves a stable position on national level and educational system, however with a drop of number of schools using the language after the second world war. The language is used in national radio and television. The recession stage for Latgalian language appears due to lack of democratic society, first 1934 authoritarian Ulmanis regime (end of Latgalian language in schools, books in Latgalian taken out of libraries and burned, forbidden official use of Latgalian (again publications in Nazi-period). Then in 1944 Soviet regime, the Language is out of official use, only some regime friendly publications still are published for some years, 1956 prohibition to use Latgalian in schools etc. In Latvia last books are printed in 1960, and semi-publicly used only by the Catholic church. Users of Latgalian stigmatized, one of only positive elements is research on dialects (A. Breidaks) and interest by other Latvians on traditional Latgalian culture (e.g. ceramics). During this time Latgalian continues to be used in exile publications and even research (Sweden, Germany, USA), also from 1975 programmes in Radio Free Europe (Munich, later from Prague).

The modern times are characterized with activism for the languages (1960-ies and 1970-ies for Nynorsk and late 1980-ies and 1990-ies for Latgalian). Latgalian is used again in print and radio and TV, receives an ISO-code. Exposure to Latgalian outside of Latgale mainly through music only. Latgalians who write in Latgalian use still use standard Latvian in communication with non-Latgalians. Nynorsk has a stable position and is used nationally, there are still many misconceptions and prejudices about the Latgalian language due to lack of knowledge. Many of the activities connected to Nynorsk are through publicly finansed institutions, for Latgalian many things are dependend on the initiative and resources of activists, and the number is few and new faces are not coming particularly frequently.

3. The thematical approach of comparison

The thematical approach focuses on certain important areas for language use, namely literature.

There is a long tradition for both languages (from mid-18th century LTG and mid-19th century NN). From 1960-1989 Latgalian books were printed only outside of Latgale. Books in Nynorsk printed also in mainstream publishing houses, in Latgalian – mainly in specialized, partly with little distribution outside of Latgola. Nynorsk books also internationally translated. Latgalian literature translated to other langauges to very little extent. Translation of classics and modern literature into Nynorsk, in Latgalian some classics, very little modern literature.

Music is a very important factor for both languages, different genres represented where the languages are used, and this is one of the major ways the language has been exposed for the users of the more used language.

There are theatre traditions for both languages. One Nynorsk theatre in Oslo with status as a national theatre. In Latgalian some of the staging in e.g. Rēzekne and Daugavpils theatres, but also one success at National theatre in Riga.

There are text corpora for both languages, e.g. for research on the languages. Nynorsk has Microsoft spell checker, Latvian IT-company Tilde is developing for Latgalian (Hugo). There have been made special stickers for use in Whatsapp in Latgalian. A common problem is that both languages have challenges getting identified by the algoritms, which makes it difficult to use the language in marketing and get exposure in other ways.

11.6% of schools in Norway has Nynorsk as school language (the top was reached in the 1940ies with over 30%). Latgalian was school language in Latgale during the first independene, now only a facultative subject at some schools. Teachers are not using Latgalian teaching other subjects. Some materials, even digital, has been made, and lately some extra state funding as been allocated for this purpose. All pupils with Norwegian as mother tongue have to pass exam in both written languages. There is only one textbook for Latvian language that also gives a short introduction to Latgalian. Most Latvian pupils (even in Latgola) finish school without even have read a single book in Latgalian.

Nynorsk has old and strong organisation, known by practically everyone in Norway. Latgalian has had some activism the last 30 years, but similar to other NGOs in Latvia, they are not so impactful politically. A Latgalian congress is organised with participation of distinct personalities from different areas with political resolutions to strenghten the position of Latgalian.

Nynorsk and Bokmål are usually not used parallelly, it is either or. In Nynorsk areas, Nynorsk is predominantly used but to a less extent for commercial purposes. When used on official signs, Latgalian is often used parallelly, Latgalian language little visible even in core Latgalian areas, often even less than foreign languages. There is some use of the languages also commercially, especially food products, ATMs of one bank (Citadele) has menu in Latgalian.

4. The instance-based approach of comparison

The purpose of the instance-based approach is to use the power of concrete and relatable facts for comparison, and each of these could be used also as a separate point of departure to unveil aspects that often is not noticeable when not comparing. Such comparison of phenomena that to a greater or lesser extent is similar for the two languages could be in categories like these.

For the purposes of this project, these four approaches for comparison have been useful to focus on different aspects of the two lesser used languages and to contextualise them.

Working together for inclusive Europe!