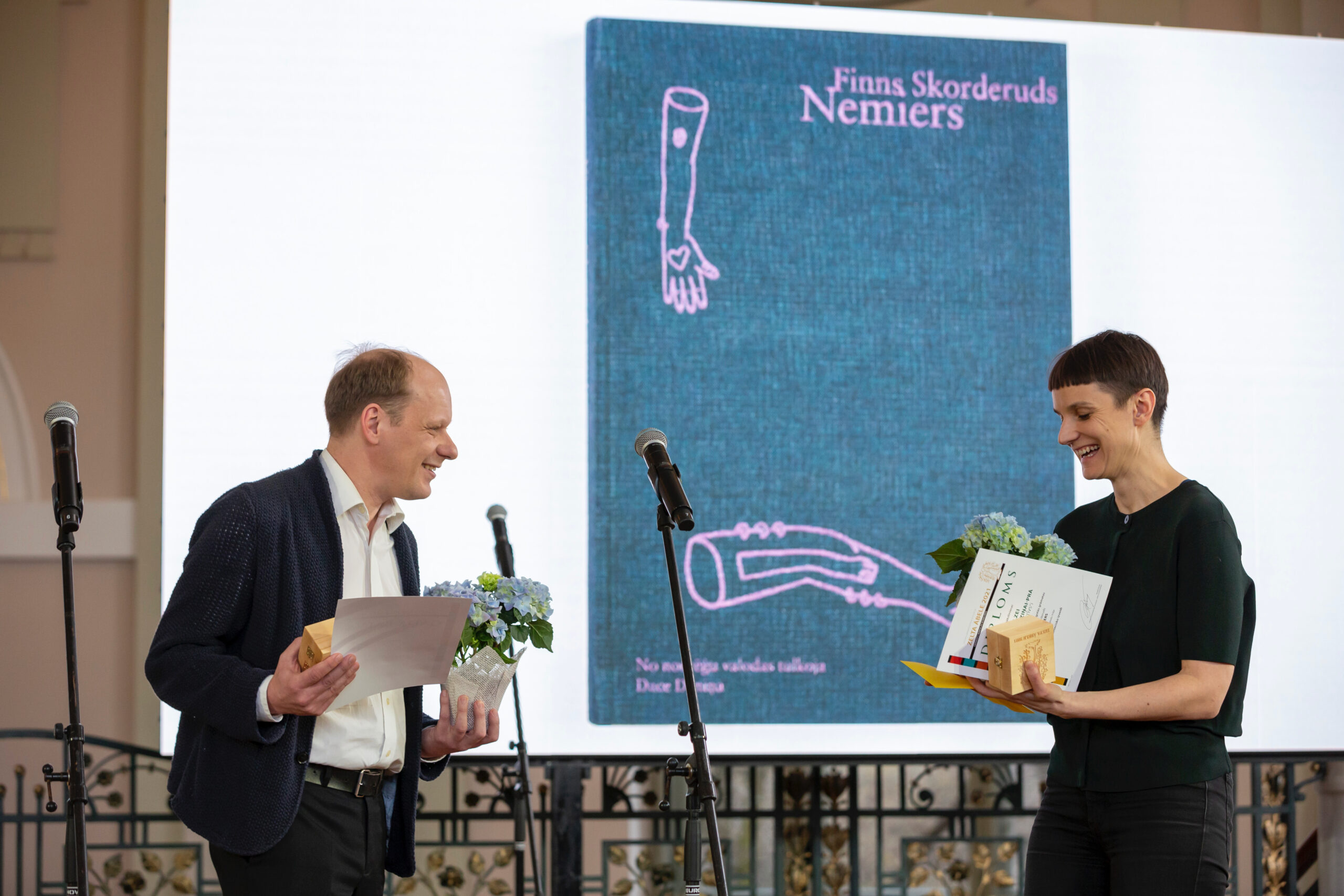 On the evening of April 11th, 2022, the awards ceremony of the “Golden Apple” book art competition, organized by the Latvian Association of Book Publishers, was held at the Latvian National Museum of Art; at the ceremony, the most beautiful books of 2021 were honored alongside other book-art- and publishing-related winners.

The competition’s jury nominated two of our books — Finn Skårderud’s “Nemiers” and Elina Kokareviča’s “Rēgi” — for prizes, with Skårderud’s book winning a prize in the Documentary category. Thank you so much for the recognition!

Translated into Latvian by Dace Deniņa, the Norwegian Skårderud’s “Nemiers” provides a glimpse into a world where turmoil can be accepted. The book’s uniqueness arises from the author’s approach and its form — it’s something between high-quality fiction and scientific literature. The author, examining the “subtle ailments” of our age as they emerge in psychotherapeutic dialogue, touches upon culture and its contradictions, unobtrusively encouraging the reader to develop a self-reflection and a comparative worldview based on it.

The book was designed, visually, to reflect the anxiety analyzed in the book. The book is big, light, and limp, both comfortable and uncomfortable. The letters are large, while the text falls continuously without spaces between paragraphs, at various times blending together or leaping from the page and creating slight alarm, yet ever maintaining good readability. The font’s size seems to decelerate one’s reading pace, causing one to slow down and take a closer look, but at once recalls childhood and the joy of flipping through the story, one page after another. Its green color “calms” the reading process and helps to arrange it.

The book’s design was developed by Ilze Kalnbērziņa-Prā (SIA “Kolektīvs”), while Ernests Kļaviņš provided the illustrations. We offer thanks to the State Culture Capital Fund, Arctic Paper, and Jelgavas Tipogrāfija for their support in the publication process. Special thanks to Jelgavas Tipogrāfija for an additional prize — the opportunity to print our next book at a discount.

Photo from the official archive of the event. Fotographer: Didzis Grodzs